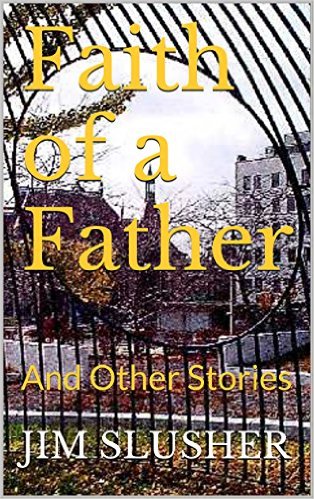 MacArthur Payne has discovered something. Faith. A faith that will permit him to live the life he has always wanted. A faith that moves mountains. A faith that changes lives - his own and those of all the people he loves. All he needs to do, he is certain, is to follow the ancient lead of the prophet Abraham - and buy a ticket for the Michigan Lottery. His story is the opening for a diverse collection of tales, including a confrontation with a Wild West gunfighter, an orphaned teenager's encounter with justice, a frightening discovery by a mayfly swarm on a country pond and more.

An Excerpt from "FAITH OF A FATHER"

The biblical parable of the talents had flashed through MacArthur's mind. He saw himself as the man to whom had been given a single talent, the one who buried it.

Splash. Yeah, change. I know something's happening. I can feel it. I know God has plans for me.

Those thoughts, the smells of the park, the taste of his orange -- all these things rinsed around in MacArthur's memory as the shadows leaked out on Washington Street, engulfing the photograph he'd seen earlier.

The photograph. Talents. God's plan. Maybe there was some link between the melancholy and the picture, he wondered.

For a man whose religion almost never surfaced in public, MacArthur Payne devoted an overwhelming portion of his internal time to spiritual matters. Perhaps only his wife and children knew just how seriously he believed in a divine order -- and how certain he was that he held a special place in that order.

Now, as he stared through folded hands out the bank window, the picture, his melancholy, his religion, even the stale taste of orange in his mouth seemed to be gathering into a strangely powerful mixture. He noted a familiar, yet still-frightening constriction in his chest. Just what was it? This palpable sensation that something was about to happen, that he was on the verge of discovering or doing something so important that his life suddenly would take on real meaning.

Yes, that's how he felt -- on The Verge, like something was about To Happen.   Several drops of real water pelted against his cheeks -- causing MacArthur to jerk noticeably. He looked up to see Ed Russell with a cup of water in his right hand.

"Jesus, are you jittery." Ed laughed.

"Huh. Yeah. Just took a little vacation to Uranus there for a minute."

"I guess so. Wanna grab a couple beers at Harry's after work?"  Ed sipped at his paper cup.

"No, thanks. Not tonight. Beth's got frame work 'til nine, so I get to play taxi."

"Well, okay then. Me and Andy will tip a couple in your honor. It's just seemed lately like you could use the break."

MacArthur sighed. He tried to figure a way to inhale a couple of beers with his friends and still pick Kathy up by 5:30.  No way. It just wasn't possible.

He looked at the clock.  Another 10 minutes and he could pack up and go home.

He finished his draft of the Grosset letter and left it for his secretary to finish and send out in tomorrow morning's mail.

MacArthur's head was bowed as he stepped out the office door, the second hand sweeping across the threshold of 5 p.m. He thought about the picture he would take.  He wondered if he would take it -- ever.

As he whipped the Chevette out of the bank parking lot, he reached over and flipped on the radio, pushing a button that scanned the stations.  He wasn't sure what exactly he was in the mood for. The thought of music of any style made him feel the rub of a salad grater against his bones. The insipid local talk shows bored him. He didn't really care to think about the news just now.

Finally, he stopped the scan at the unmistakable singsong of a radio preacher. Why not? he thought. Maybe I'll hear something to get me out of these doldrums.  On an even deeper level than perhaps even he could recognize, he also hoped to hear something that would turn his life around -- that would take him past The Verge.

"You have to treat a FAITH fact just like it were a PHYSICAL fact," his radio chanted at him.

"The apostle Mark states it unequivocally right here in his Gospel.Chapter 11, Verse 23: 'For verily I say unto you, That whoseoever shall say unto this mountain, Be thou removed, and be thou cast into the sea; and shall not doubt in his heart, but shall believe that those things which he saith shall come ....

“Look, brothers and sisters, faith is a very simple thing to understand.  You pay your water bill, your gas bill, your VISA bill, you pay all these bills with a little  piece of paper that has your name at the bottom, don't you.  Well, let me tell you something, faith is that piece of paper.

"Faith is the piece of paper that stands for the cash that pays for the thing that you desire.  Nowhere have you heard me mention any physical, material object being traded. Yet, the water company takes that piece of paper and gives you water, don't it, brothers and sisters?"

MacArthur heard the murmuring radio crowd's heads nodding up and down

"And, you have faith that just by turning in that piece of paper, the water company will continue to provide you water, don't you, now?

"Sometimes," the radio preacher coughed a little twitter of a laugh, "Sometimes, I bet you start writing those checks before you even get that piece of paper from your employer to your own bank, don't you?"

MacArthur heard the chuckling Christians and smiled that, indeed, he had been known to write a check expecting his own paycheck to arrive first.

"Well, faith is like God's check to you," the radio minister went on. "Jesus said that with faith the size of a mustard seed a man could move mountains. Release your doubts. Cash in God's check. Begin living for Him, and see if He doesn't keep His promise."

The singsong continued, but it could not contain MacArthur's attention. It was not until a 7-Eleven store sign jolted his wandering mind back into his control that he regained a sense of himself. One of the quickest ways he knew to quench a bad mood was to buy something, so he figured he would pick up a copy of American Photographer to read later.

He took his time at the magazine rack, half hoping that some other publication would capture his interest. None did. He grabbed the American Photographer and took his place in line at the counter. He did not flip through the magazine while waiting. Instead, his eyes jumped from this impulse come-on at the counter to that. He imagined the children who eagerly traded their pennies for Gummy Gators, the poor saps who actually spent money for leather key chains with "Saginaw" printed on them, the even dumber saps who wasted their dollar bills on Lotto tickets.

"Somebody's got to win," the sign beckoned. "Why not you?"

MacArthur considered himself a reasonable, practical man, and he knew that Lotto was not a particularly practical investment. What were the chances of winning? Something like 7 million to one? Hah. What a joke.  Who could play such odds?

Still -- his mind was tickled -- somebody DID have to win.

MacArthur paid the teen-aged clerk for the magazine and left. He did not notice the rest of the drive until his garage yawned automatically to welcome him home.

"Oh." Betty fumbled for the correct reply. She ought to know it by now, she thought. They had had this discussion almost monthly throughout the ten years of their marriage. She wrestled with the urge to be cross. That was the worst reaction ;it only made Art clam up. But damn if she was going to patronize the man's self-pity again.

"I know. I know," he said. "The whole thing has become embarrassing. But I just don't know what to do. I spent my whole lunch hour Thursday and Friday thinking about it up at the statue -- you know, the one at the Federal Building?"

Betty nodded. She knew the place all right, though she'd only been there once, when Art tried to impress her with its limited appeal.  That he'd started going there again she accepted as another bad sign.

MacArthur continued, "I told myself, like, okay, God gave me eight good hours for work a day -- and I use them all up telling people they can't have their toys or explaining why my bank's gonna get such a big chunk of what they pay for their toys.  And when I get home, do you think I feel creative? I feel drained, for God's sake. I just want to have a beer and veg out in front of the goddamned television set. Betty, I love so much about my life, but I'm miserable with myself. Something needs to be fixed."

"With us?" Betty hesitated.

"Dear God, no." MacArthur swept her into his arms. "I love you, and I love our kids with every molecule of my soul. No. No. Everything around me is wonderful. It's inside me where something is wrong."

"Well," Betty nestled against his chest as the game resumed. "I guess we just have to keep the faith. Keep working. I love you, too. I'll do anything I can to help ... And, hey, don't forget: you've done an awful lot for this family. For all the disappointment you may feel for yourself, there are four other people around here who think you walk on water."

MacArthur took a long swig from his can of Busch. The faith, he thought. Yes, he would keep the faith. If God really wanted him to succeed, to use his gift, to be happy, God would show him a way to make it happen.

He again felt himself peering toward The Verge. It was so near ... his move, his ascension. He had felt it coming for weeks. Now, it all but scorched his cheeks. He believed himself so close.

But why was God waiting so long?

In the middle of the night, as MacArthur lay on his back almost weary enough from his depression to finally settle into sleep, he suddenly had his answer.  His eyelids popped open.  His face, indeed his entire body, became warm and tingly.

It was time for the servant to dig up his talent and put it to use.  It was time to quit waiting for The Verge to come to him.  He strode across the line himself.

Once and for all. Irrevocably.

It was time to walk God's check down to the bank.